The world of Tel Tekka isn't a modern world like that of your current Earth. It's much more medieval. Governments here are usually monarchies.

Take the Ice Dragon Tribe for example. While not a queen in name, Elder Yulai serves that purpose. They even call their young, Princess and Prince. For in this world the Dragon Tribes are more important than kings or queens. So the esteemed title of Elder is what she gained. 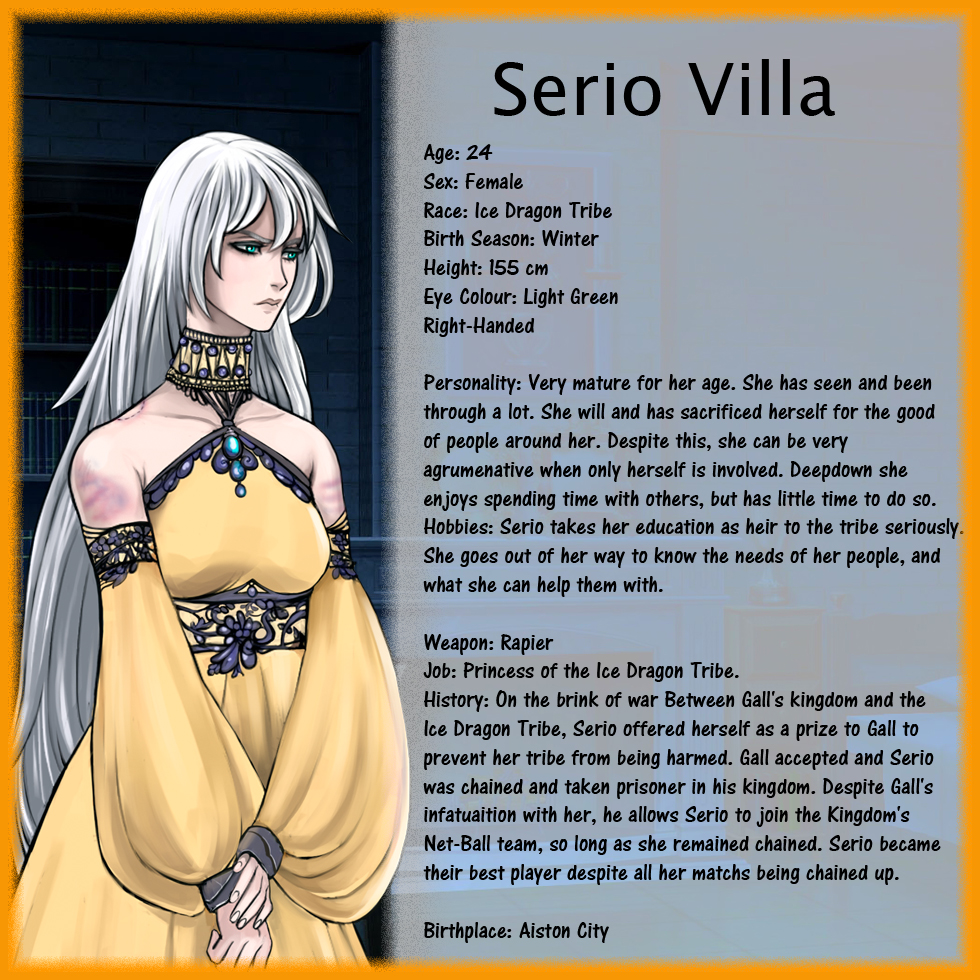 Serio Villa. Perhaps the only person of the Villa family who could achieve the same icy demeanor as her grandmother. Some people even swearing she was her reincarnation. Of course such thinking is silly, as Yulai still hasn't died.

She is twenty four when Frey and company meet her. But twenty years ago, no one would have thought she'd turn out how she did. For Serio was a mischievous child. She cared little about anything except for her own amusement. I didn't think a four year old could be so energetic in her regards for her pranks. Torai, Yulai's current personal aide, was often the target of her acts. She skipped out on lessons and often stole food from the kitchen.

Now, many people wondered how Serio would turn out, and much of her actions can be considered the fault of her parents. As Serio's parents adored their daughter, they pampered and gave her a lot of attention. So Serio had developed a common trait among princesses, of being haughty and needy. Refusing to listen to anything anyone tried to tell her.

It was this moment that changed Serio forever. She had known her parents to be kind and loving people, and the world took them from her. For a while it seemed Serio would become withdrawn and isolated, how she kept to herself, stopping doing pranks, and stopped speaking altogether.

Then one day, about a month after losing her parents, Serio went to see Yulai. Yulai had previously tried to get close to Serio, but couldn't get through to the girl. So when Serio asked Yulai how to become strong, the first thing she did was grin. The second, was she told Serio that her parents were strong, and that strength was meaningless. That a person needed a sharp and keen mind.

So those lessons Serio cared not for, became the focus of her being. Those that served the Villa family, could hardly believe the difference. By the time Serio turned eight, people had forgotten the mischievous ankle biter she had been. When she was sixteen, people began to see her as a clone of Yulai, and when she was twenty, people saw her as the best candidate for their next leader.

Serio came to love her people, and understand why her parents sacrificed so much. But a child's memories of when they were four, are so few. She had long forgotten the specifics of her parents, even though they had been her driving force, that had been replaced with a sense of duty instilled in her by Yulai. Yulai knew that Serio would become the next Emperor, she didn't need foresight to figure it out. She was one herself, and she knew what the signs were, at least when it came to the Ice Dragon Tribe.

Yulai had found her new successor, even as he physical strength faded, she regarded her granddaughter with increasing pride. So what happened three years later, almost broke her heart. I will state this two more times, for it's importance. This is a medieval world. 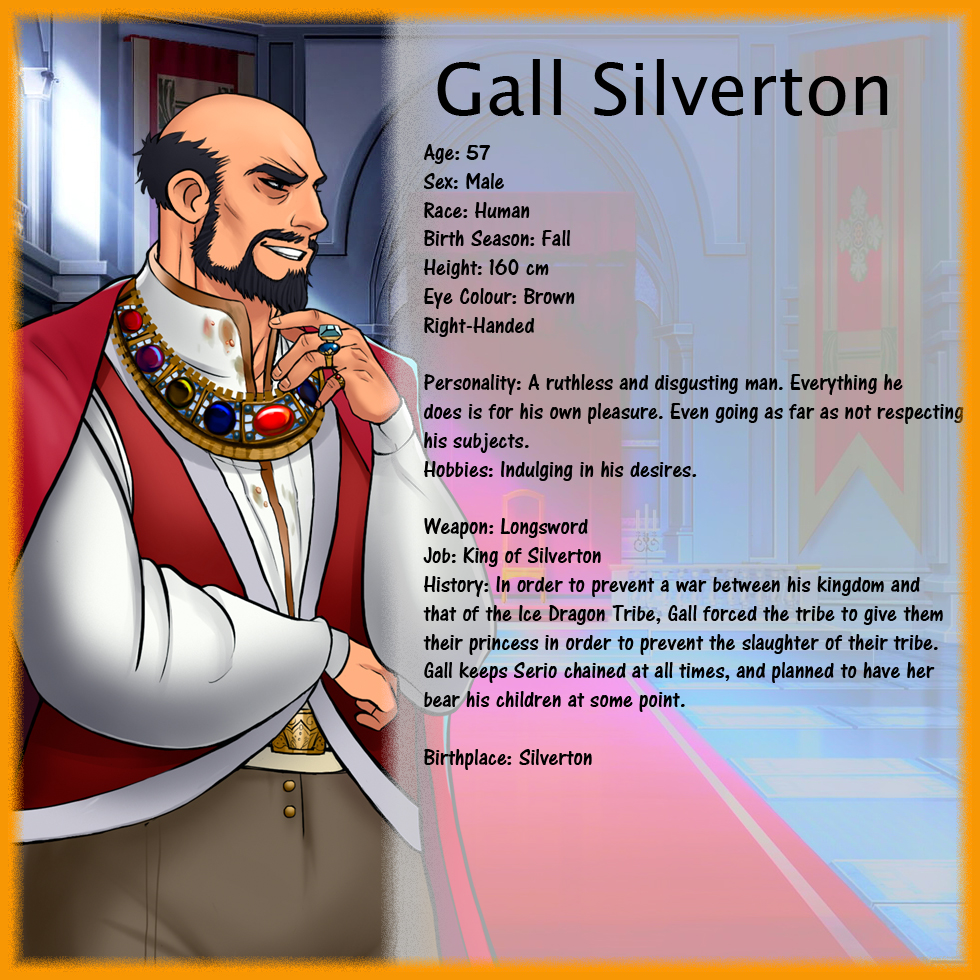 The king of this country was named Gall Silverton. It was he that threatened the Ice Dragon Tribe, and it was he that accepted Serio's deal, and so, Serio became his prisoner.

Now Gall is a selfish and arrogant man. He was born into royalty, and was prince. Like his parents he knew the luxuries on royal life. When his father passed, he became king, and as king he ruled with a heavy hand. The taxes on his people were hefty. Over his rule, he made sure to keep a strong army, through a delicate balance he maintained his rule.

Oddly, for being such arrogant man, this balanced rule came as a surprise to everyone who learned of the country. But the Kingdom of Silverton had something other countries did not. Net-Ball. A staple of pride among the people, to watch sport. Most agree that this was the main reason Gall's kingdom stayed in balance.

So despite being Gall's prisoner, Gall had allowed Serio to participate in the sport. Both to parade his prisoner, and to symbolize his rule to outsiders. Serio was always locked in chains, and this included when she played Net-Ball as well.

This also entertained his people, as Serio actually learned to play the sport well, even when chained. It became both a pride for her and Gall's people.

But this is a medieval world. Serio is a prisoner, and not all prisoners are treated well.

In the depths of Gall's castle was a dungeon, that existed since ancient times. It was here that Serio often found herself at the mercy of Gall's whims. He's arrogant and prideful, so when he wishes to break someone, he doesn't let an opportunity pass.

Serio faced many torments in that dungeon. I don't personally enjoy talking about torture, so I'm not going to go in detail, but I'm again surprised at Serio's strength of will. No matter what she faced in that dungeon, Serio never broke. In front of Gall she never showed signs that she would be compliant to his demands.

In return Gall's torment would be worse the next time. A dementated game of cat and mouse. Gall was drunk on the feeling of having a prisoner, and essentially winning a war without ever having fought it. This year was torture for Serio.

And while Frey would eventually come to Serio's aid, he could never stop Gall from taking one last precious thing from Serio. Her magic. Like I said last time, sex is the catalyst for losing one's magic. Gall may not have been the one to do the deed himself, but it was on his order that a group of his royal knights did the task.

A certainly unpleasant and traumatic event for anyone, but this is not your world. In this fantasy world of swords and magic, this is a commonplace occurrence. Prisoners are just that. Tools to be used by their captors, and Gall in his greed knew this. He wanted to break the prideful Serio, and her resistance only presented him further challenge. If Serio had given in to him, she might not have had to suffer, but it was her choice to keep her pride despite what she had given up to save her people.

Serio is a strong woman. Even the day after, she stood before Gall, very prideful with an icy demeanor, but Gall had left his mark on her. I shudder to think what would have become of her if Frey never came, but thankfully, he was eventually there.

Far on the other side of the world, where the Legion controlled half a continent, there exist tribes of barbarians who rape and pillage their way across the countryside. Serio's hardly alone in that regard, but it's an unpleasant topic nevertheless.

So that's all for this time. I do have a bit more to share. A much lighter topic, as there are still others of importance that I have yet to reveal. So until next time. 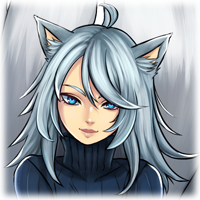